By Peter Kim in race recap on August 1, 2016
“How’s training going?”
“Meh,” I shrugged.
I had no idea. I was wandering in a forest without a compass.
With the loss of my mother in February, I was not training as hard as I should have. I had skipped too many weekend bike rides on 9W.
I was apprehensive but there was no turning back now.
Friday
My wife and I drove the 4.5+ hours from NYC to Lake Placid. As we checked into the hotel, I was nervous and hurried towards Iron Village to meet the 5pm athlete checkin deadline (there are no checkins on Saturday). The volunteers saw me and felt bad for me. They watched my bike and sent me back to the Olympic Center. I signed in and there was no line. I weighed in at 195, which is a little overweight for me.
Saturday
I was excited about the pancake breakfast and ate a few stacks. I walked through Iron Village quickly and checked in my bike and gear bags. I attended an athlete briefing and got acquainted with transitions.
Sunday – Race Day
The alarm went off at 3:30 AM and I ate my bagels and peanut butter. By 4:45 AM I made it to transition. I checked my gear bags and volunteers pumped my tires. 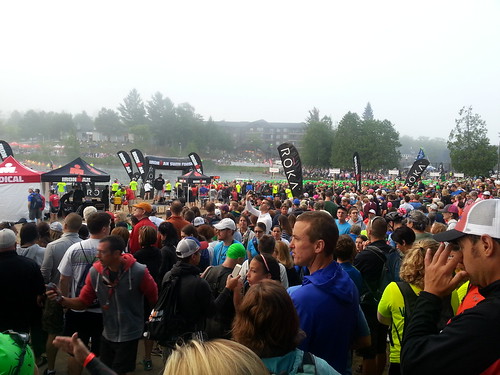 This year Lake Placid was a pro women’s race, so after the cannon blew at 6:40 AM, the mass waves moved into Mirror Lake.
I got into Mirror Lake and the battle began. Triathletes were jockeying for position next to the underwater cable. I did my best to avoid punches and kicks to my face. 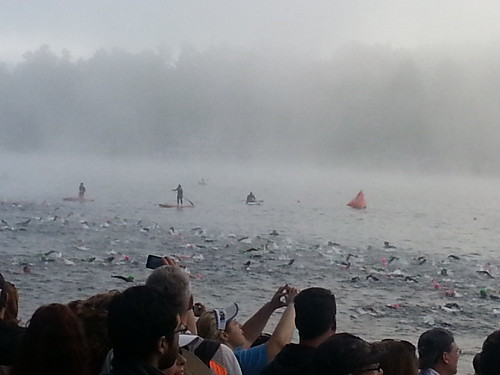 Within 100 meters, a dreaded fear came alive… I felt nauseous. I was trying to stay horizontal but I felt like the night after my 21st birthday and was going to blow chunks.
Panic set in and I did what I could do to mitigate that risk: tread water.
Initially this was an awful idea, as other triathletes were trying to swim over me. I tread away from the cable but it was a struggle. As the feeling subsided, I swam as I could but I still felt nauseous.  For the first time in my life, I thought a DNF was coming or I would drown. How could I struggle within the first 400 meters? 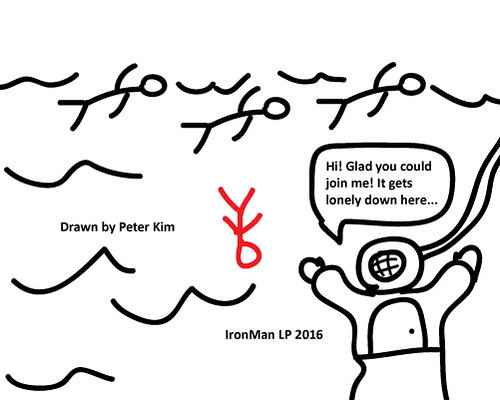 How I felt during the first 400 meters…

Slowly and steadily I made it through the first loop and I was relieved. The second loop was a little better and I got my rhythm going.
I am still alive.
Time 1:41:03
I found wetsuit strippers and I was happy to be out of Mirror Lake. Two guys stripped off my wetsuit and I was a little delirious. I took a slow stroll to T1 because I did not want to slip. I grabbed my bike bag and changed.
T1 12:57
I got my bike and headed out and was lucky to catch my wife! I gave her a kiss then biked away. 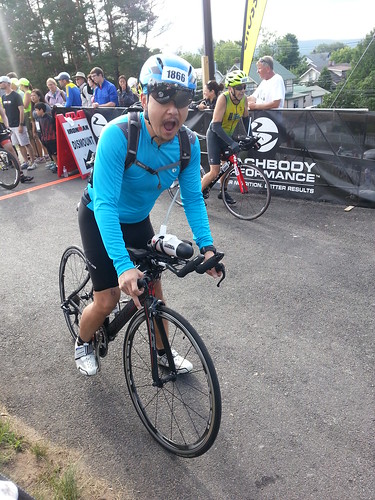 I felt good during the first few miles and flew through the descent into Keene. Unfortunately I experienced thigh cramps around mile 40. I had to stop at an aid station. I ate a banana, took a short break and massaged my thighs. It was tough. 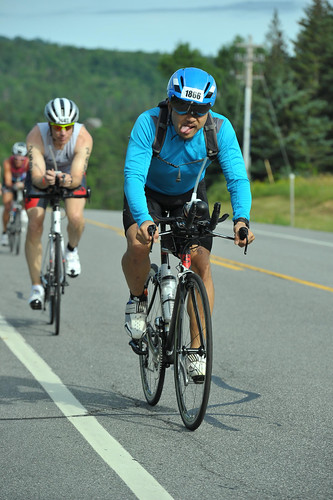 Trying to have fun out there…

The three bears and the last hill to finish the loop was brutal. I made the first cutoff (1:30 PM) with the first loop. Hooray! 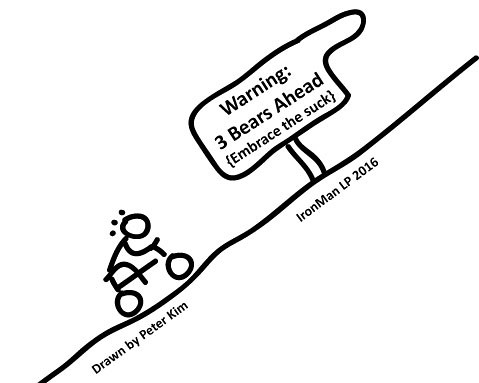 The trials and tribulations of a weak hill climber…

On the second loop, my legs felt the fatigue. I stopped at every aid station and asked how I was doing in terms of time. I wished I had my bike computer (hard to rely on my watch). The volunteers assured me that I was doing fine and had ample time to finish.

As I hit mile 85, I noticed very few bikers on the road…

By mile marker 100, a volunteer waved me down.

I missed the bike cutoff.
I put my bike on the back of a truck and sulked in silence. There were about 10 others.
When I got back to transition, I called my wife and assured her that I was ok.
“I’m proud of you!” she exclaimed. I am lucky to have my wife as my support system.
From there I dropped off my gear at the hotel, then went to the Pickled Pig for dinner. 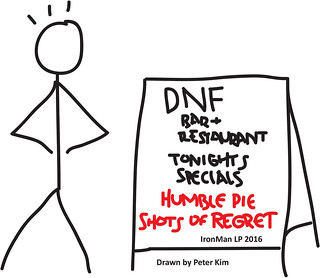 The Anguish of Defeat

Hearing Mike Reilly’s voice “You are an IronMan!” was depressing. He was not calling my name tonight.
There was no shame in a DNF. However, I realized that I never gave up and I did my best. It still burns, but there is always next year.

Ever experience a DNF? How did you cope with it?